The Concept Of Career Success Among Muslim Managers

This paper presents the results of a study on the understanding of career success among Muslim managers and the factors contributing it. Career success has been defined differently in different contexts. In western literature career success has referred to as reaching the top post in the company or getting the highest salary, or getting the most number of promotions or to obtain the most powerful position in the shortest possible time or to get job satisfaction. But to the Muslim managers career success seems to have different characterization from the western definition. A qualitative study was undertaken to identify the definition of career success among Muslim managers from small to large enterprises. Thirteen Muslim managers were interviewed from different sectors. They consist of 9 males and 4 females. This study concluded that to Muslim managers Career success means to be successful both in this world as well as in the hereafter. Setting Prophet Muhammed (pbuh) as the reference point, they have to follow in his footsteps. The study reveals that having strong Islamic spirituality or Taqwa (i.e belief in God, obeying God’s commands, observance of prayers, payment of zakat, giving to charity, honesty and sincerity, patience, asking for forgiveness and giving forgiveness) certainly contribute to career success. 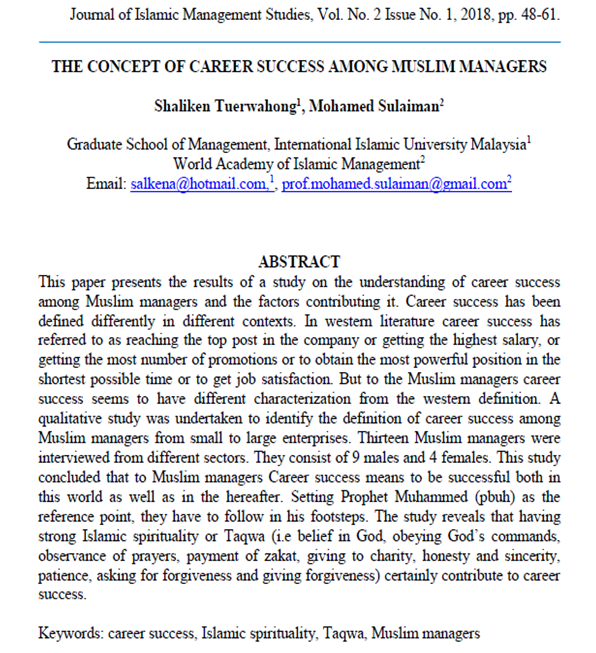